How To Jump A Car Battery – A Simple Guide

If you are wanting to learn how to easily jump start your car, hopefully this guide will help.

When the battery on a car has lost its charge and does not provide sufficient charge to start the car, it can be frustrating. What is even more frustrating, is that it always seems to happen when you are in a rush!

There are several reason why a battery loses its charge such as:

The lights being left on

The battery is old and needs changing.

Safety: Before you attempt to jump start you car battery, if possible always wear protective clothing such as gloves, goggles and any other suitable safety clothing.

How Long Does It Take To Jump A Car Battery

The time it takes to jump a car battery, simply depends on many different factors. However, it should generally only take just a few minutes to jump start you vehicle. If you have the right equipment, then the process should be pretty straight forward. However, if your battery its old or really drained, then it will take longer and could be between 10 – 30 minutes.

How To Jump A Car Battery By Yourself

Below, are two of the most common ways to jump a car battery. The two ways are both very simple and do not  take long to carry out.

How To Jump A Car Battery Using Jump Leads or Cables

Firstly, to perform the task successfully, you must first have a good set of jump leads/cables. You should also have a ‘donor’ vehicle to supply sufficient charge to the dead battery.

Ensure that the ‘donor’ vehicle battery, has the same voltage as the battery to which you are wanting to jump start.

Please Note: Every battery has a Positive and Negative terminal and these will be clearly indicated with the plus (+) and Minus (-) signs. 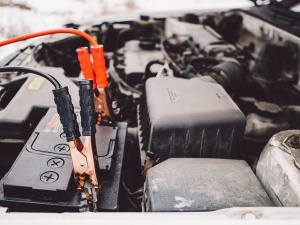 Bumper to bumper is a common position or positioning the vehicles side by side.

Switch off the engines of both cars and ensure that all other electrics on the car are also off such as:

Also make sure that the heaters and any other facility that may be draining charge from the battery or cigarette lighter, are off.

Open the bonnets of both cars and locate both batteries.

Check the batteries for damage. If the batteries are damaged or show signs of corrosion, leaks or have any form of cracks, it is advisable not to continue with the procedure and to call your local garage.

Please Note: A ‘Dead’ or ‘Discharged’ battery releases a flammable gas known as ‘Hydrogen’. It is important, to connect the jump leads/cables to the ‘dead’ battery first. This is so not to cause any stray sparks which could results in the gas igniting and injury to you or any other person close by.

Connecting The Jump Leads/Cables. The order in which you should connect your jump leads/cables is as follows:

Once the car has started, you will need to disconnect the jump leads/cables from both batteries. This should be done in the reverse order to attaching them.

It is advisable to keep the engine of the car that had the dead battery running for at least 20-30 minutes and if you can take the car for a drive, this will help the battery charge.

How To Jump A Car Battery Without Another Car

How To Use A Car Battery Jump Starter

As we have previously mentioned, a jump starter pack, will make it easier to jump start your car. This is especially much more beneficial, when you are on your own. It simply means that you do not need to really on having another car on hand. The following video, demonstrates just how easy it is to jump start car without battery on your own. This is a great car accessory to have in your vehicle and will save you a lot of time and stress in the future.

Hopefully, this simple step by step guide on how to jump a car battery, will help you and ensure you are back on the road in no time.

Back To Members Area

This website uses cookies to improve your experience while you navigate through the website. Out of these, the cookies that are categorized as necessary are stored on your browser as they are essential for the working of basic functionalities of the website. We also use third-party cookies that help us analyze and understand how you use this website. These cookies will be stored in your browser only with your consent. You also have the option to opt-out of these cookies. But opting out of some of these cookies may affect your browsing experience.
Necessary Always Enabled
Necessary cookies are absolutely essential for the website to function properly. This category only includes cookies that ensures basic functionalities and security features of the website. These cookies do not store any personal information.
Non-necessary
Any cookies that may not be particularly necessary for the website to function and is used specifically to collect user personal data via analytics, ads, other embedded contents are termed as non-necessary cookies. It is mandatory to procure user consent prior to running these cookies on your website.
SAVE & ACCEPT
Back